When my friends batted around ideas of city breaks for our annual girls trip last year, I’d never have thought Prague would take the cake. My limited knowledge of the Czech Republic capital was that it attracted more stag dos in the summer than wild beasts to a watering hole. 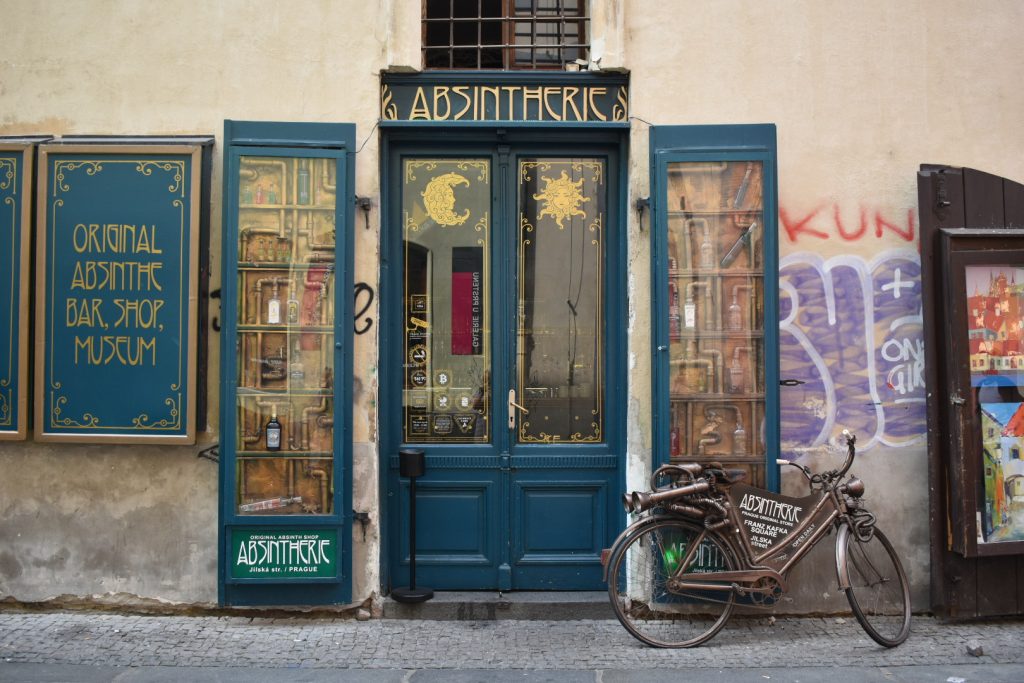 Yes, it’s a great place to quench your thirst for cheap but tasty booze, and behind Amsterdam is THE place for a seedy escape (*cough* night gyms). But there’s also an innate beauty that I’d argue mirrors the romance of Rome and even Paris. 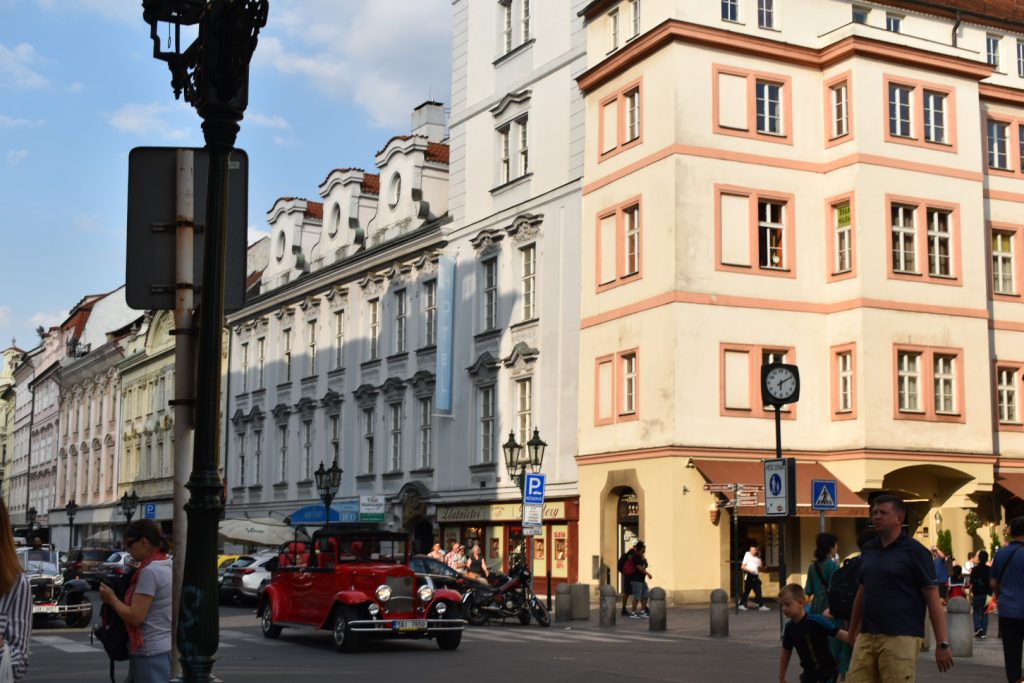 Cobbled streets surrounded by pastel palaces and interwoven with Gothic architecture makes for a great insta-snap! There’s even the possibility of bread but we’ll get to that in a mo. 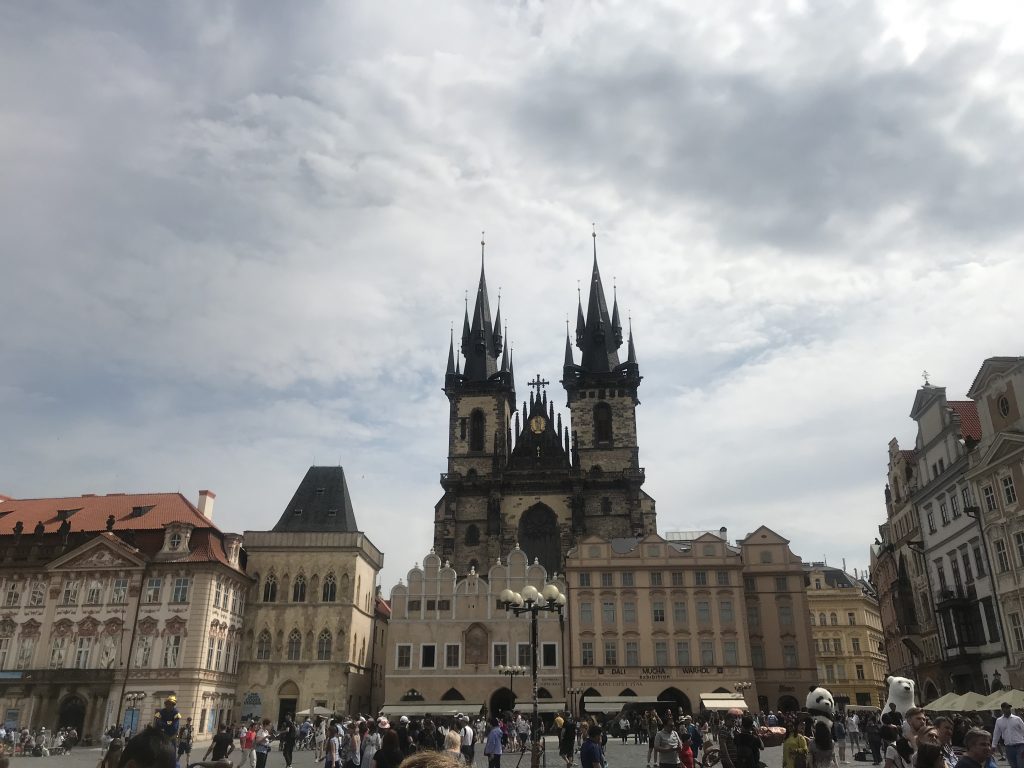 So why is Prague so pretty? Let me get my history head on and take you back to 1989, during the Velvet Revolution. That’s when the country was freed from communism and the city was transformed into a true gem of Europe. Crowds swarm to well-known sights in peak season, including the castle of the hill, Charles Bridge, and the anti-climatic Astronomical Clock, but for aimless wanderers like us, there are plenty of hidden restaurants, shops and beauty spots that kept us occupied for hours. 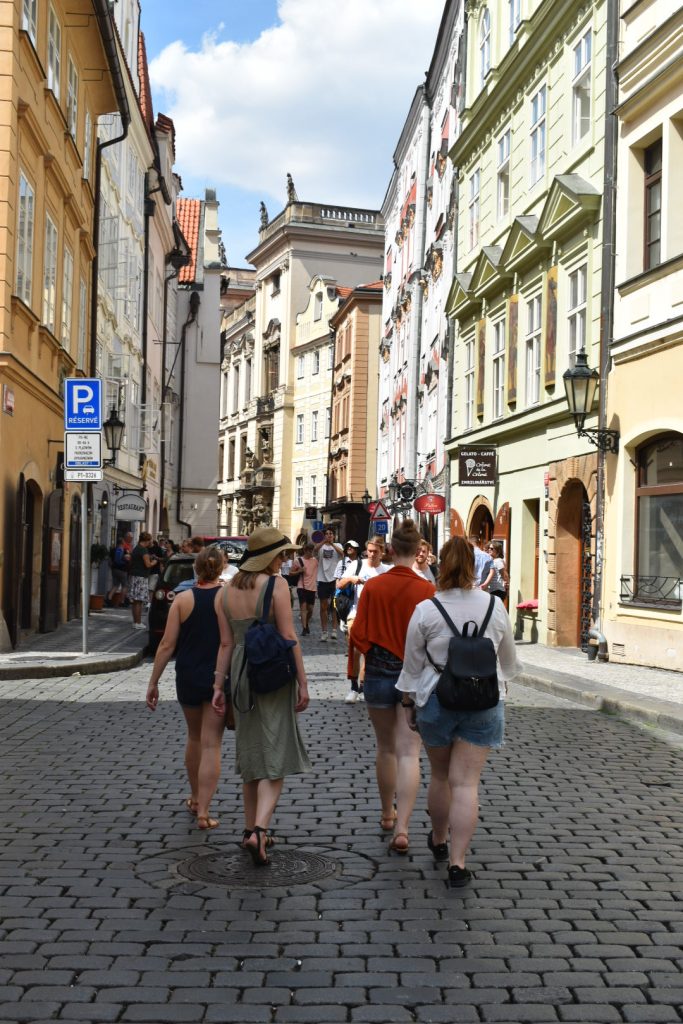 Get your bearings with a bike tour

With all the cheese, beer and sugary delights you’re going to get through this holiday why not start with a bit of cardio? We booked on with the 3-hour Complete Prague Bike Tour, as it was rated number one at the time on Trip Advisor.  Our guide was a lovely local who had a plethora of fun facts about our stops as well as enviable thigh strength! 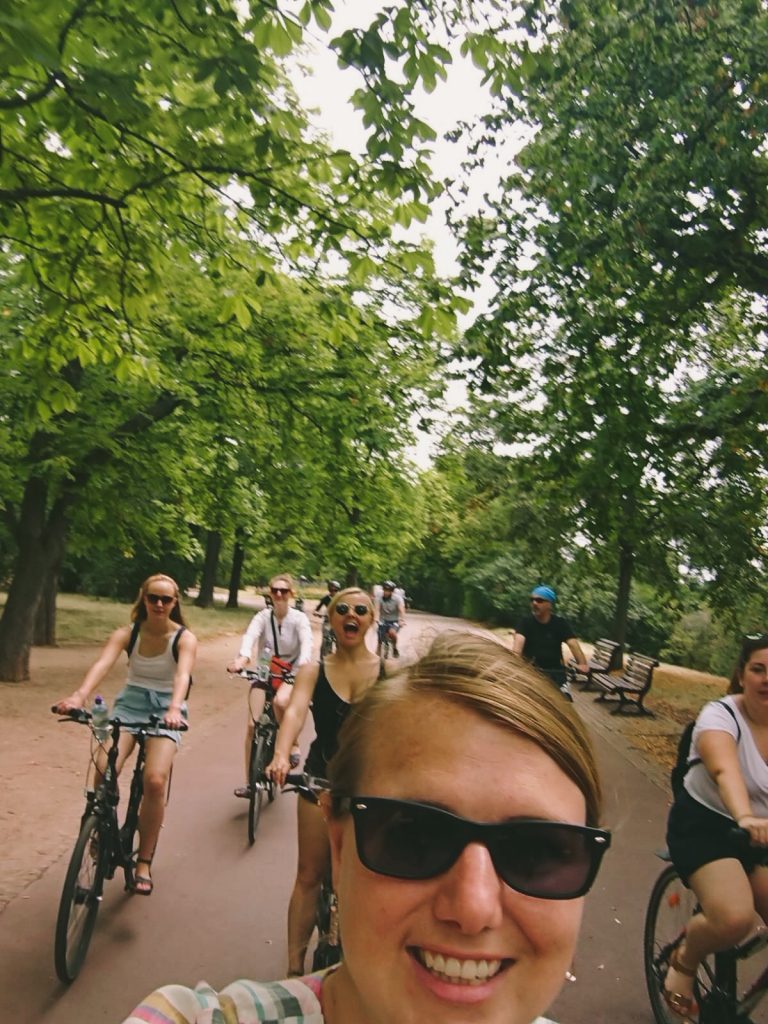 Not only does it take in the Old Town Square and surrounding area, you also travel along the river and then up a few steep hills to reach the picturesque Prague Castle. The journey up isn’t too trying, but I’d recommend plenty of water and a small breakfast. 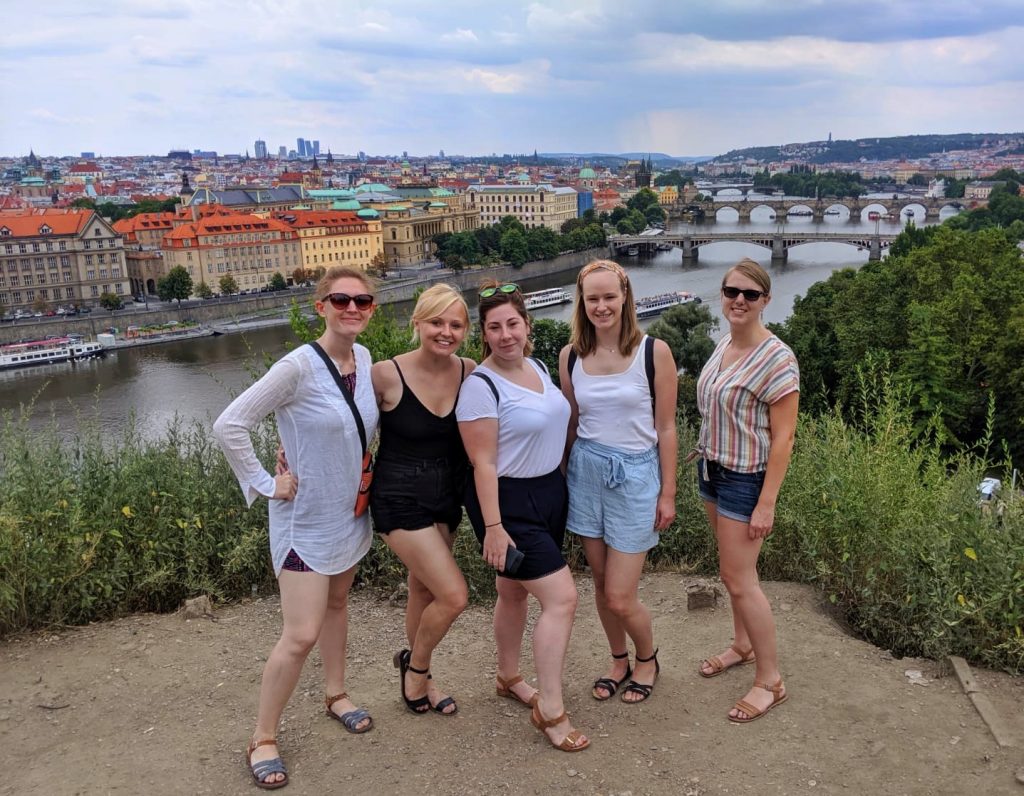 £1.92 pint? Yes please! Cheap beer is regularly flowing in Prague, and you get a lot more than you pay for. Pilsner Urquell was invented in 1842, putting the Czechs on the map of fine brews. A number of other big names joined the taps throughout the years, and now microbreweries are popping up all over the city to cater to thirsty travellers. 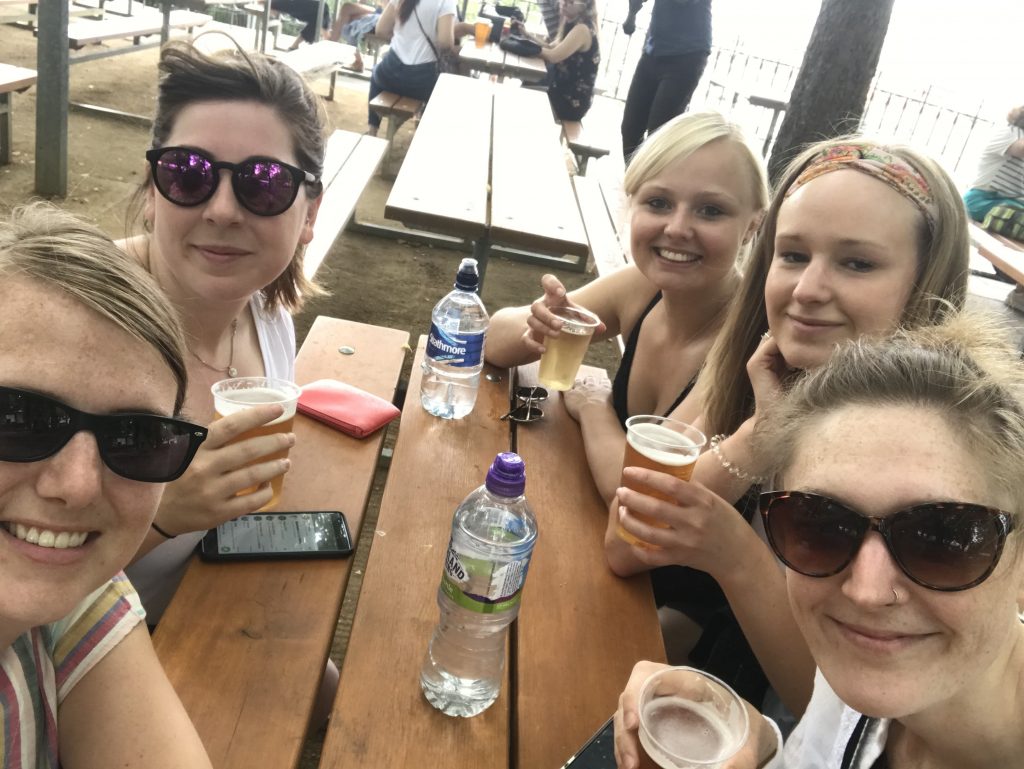 I’m not a heavy beer drinker, but according to my friends, after much research and testing, they preferred a Staropramen, which is brewed in the Smíchov district, and has a light, fruity flavour. There are plenty of places to stop off for a drink, but if you want a more immersive experience you could always book a breweries tour – here are the top ones on Trip Advisor. 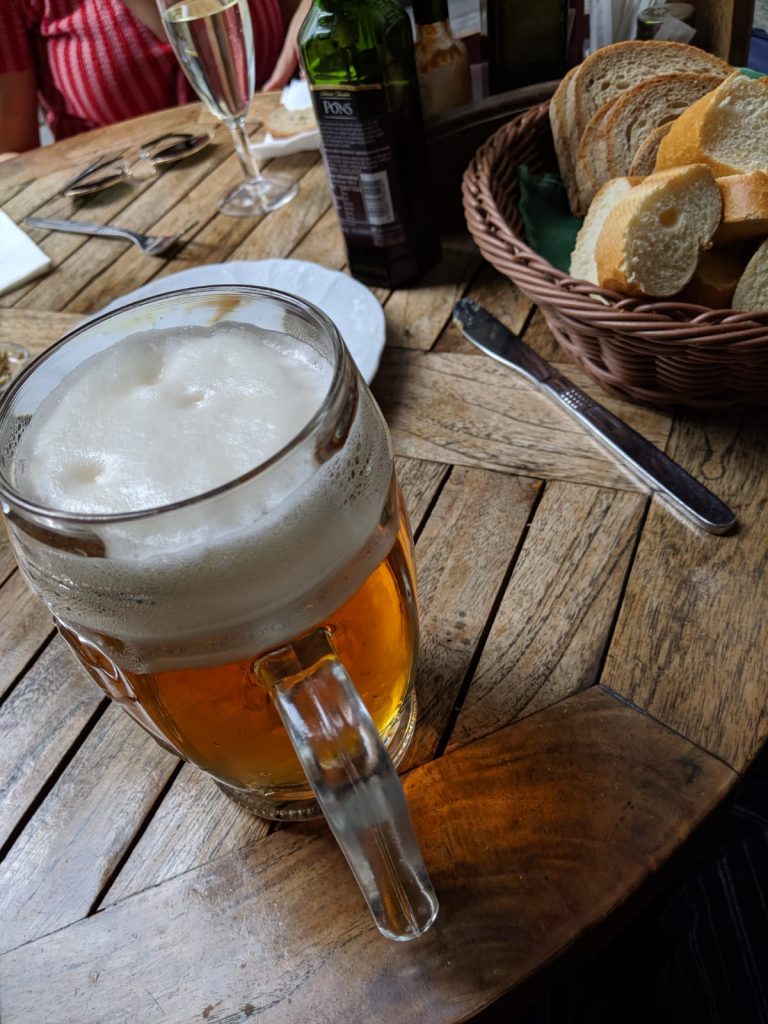 Dish out on some Czech delicacies

I wouldn’t say Czech food is one of my favourite delicacies, but when in Prague! In winter I’d imagine it’s perfect to warm the cockles of your heart but summer it was a bit heavy for me. I would recommend ordering the famous roast pork with dumplings and sauerkraut, or the soup in a bread bowl. Really tasty and saves on washing up!

You’ll also find Czech gulas on many menus which is great for a meat lover. It’s stewed, and topped with a generous portion of gravy and served with bread dumplings.

A couple of recommended restaurants include Wine O’Clock Shop in Old Town, which offers little dishes alongside, you guessed it, wine. U Kroka is also a good shout as it looks great, has decent sized portions and a big range of beers. 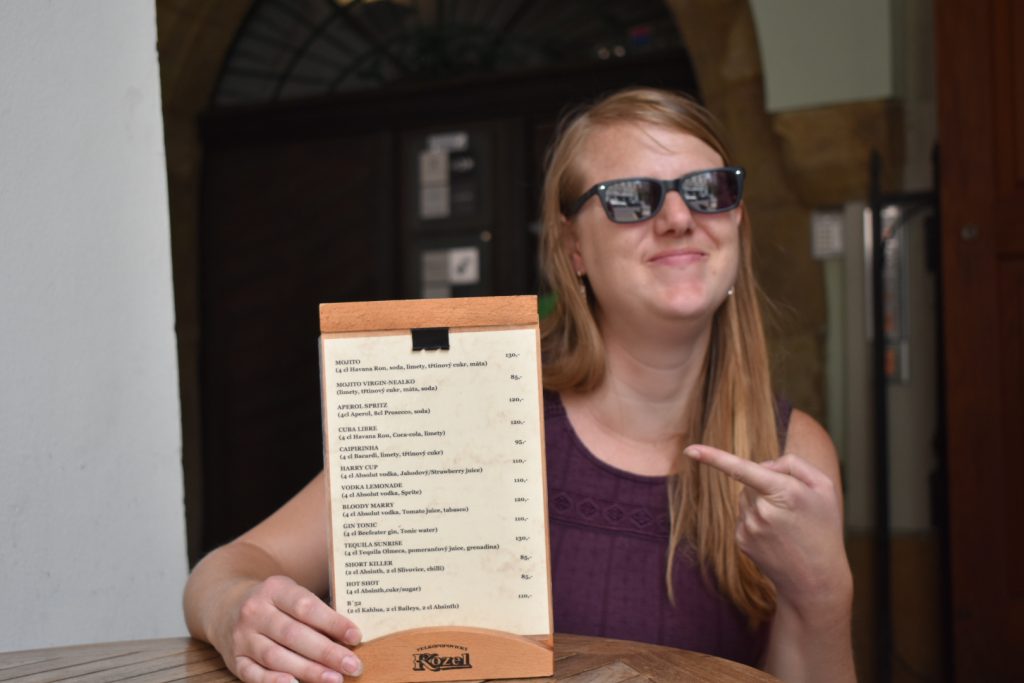 A very happy Tara when seeing the prices

Make use of the unconventional museums

You see one piece of priceless art and you’ve seen them all am I right? Well, no I’m not but if you’re tired of perusing galleries or national museums then Prague has plenty of weird and quirky ones to have a giggle at. We paid around £10 to visit the Museum of the Senses, which is a short walk from Old Town Square. 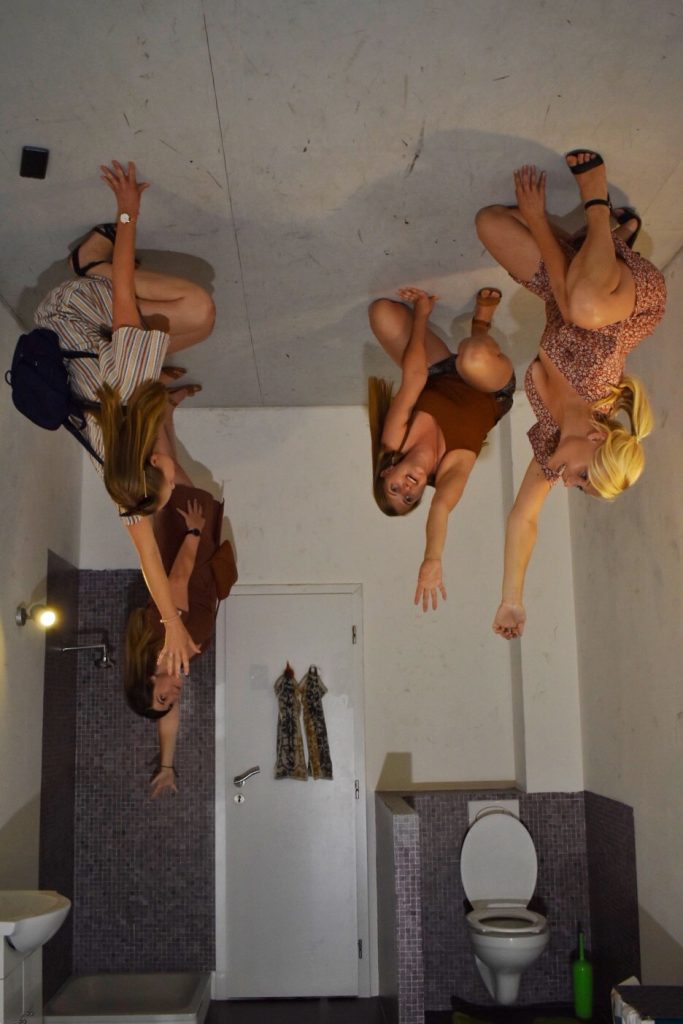 Museum of the senses, Prague

A place where nothing around you seems as it is, and a great chance to freak out your followers on Facebook with some great holiday shots. 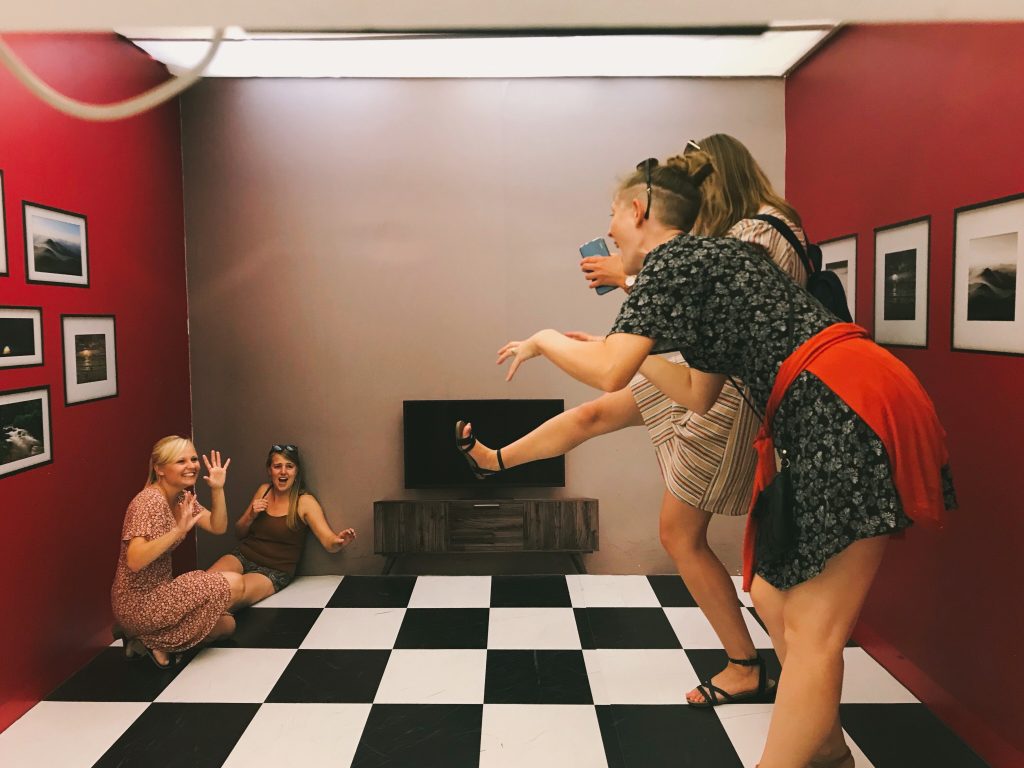 Museum of the Senses, Prague

Others to consider include the Lego Museum, Museum of Communism, and the Sex Machines Museum (don’t give me that look, I know you’re curious!)

Sip on a cocktail while watching the clock

During our guided bike tour we were warned against waiting around by the iconic Astronomical Clock in the Old Town Square on the hour, as hundreds of other curious tourists will be doing that too. I’m not one for big crowds, so we opted for getting a cocktail at the nearby rooftop bar and watching from a distance. 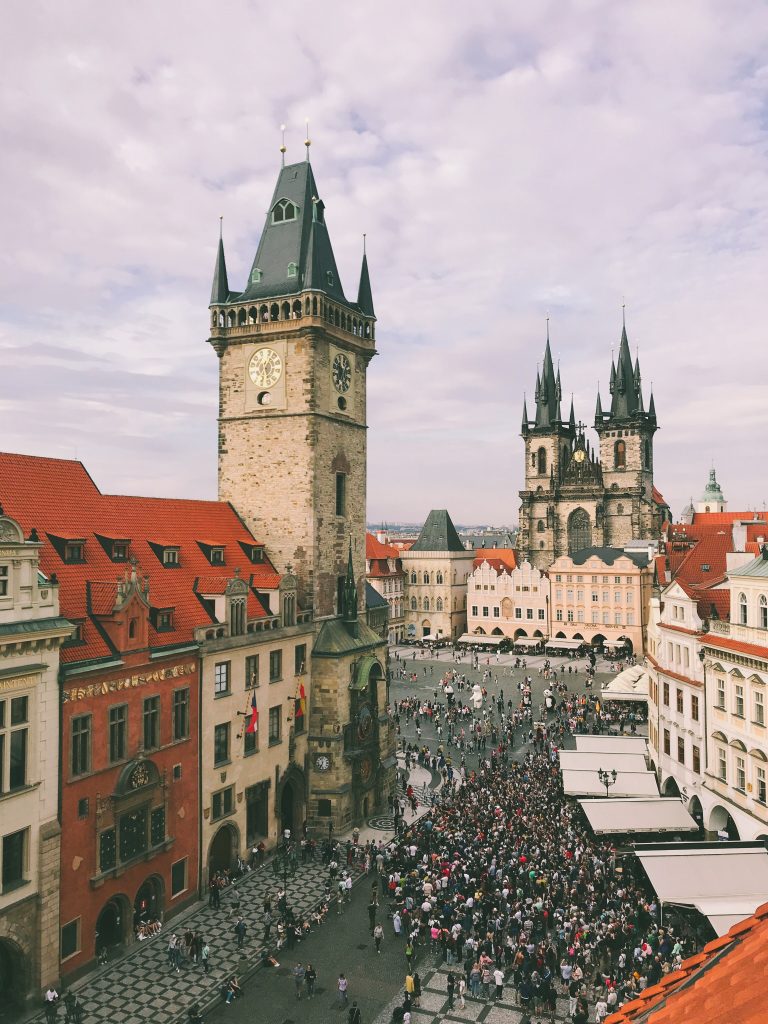 Terasa U Prince is perched on top of the Hotel U Prince and is accessible by a very small lift from inside. At peak times like lunch and dinner be prepared to get well acquainted to someone’s armpit for a minute or two.

I’d highly recommend booking a table too if you aim to go for dinner, we were lucky to scoop a table on a whim at 6.30pm, but better to be safe than sorry. The cocktails are delicious and at £6 a glass quite reasonably priced for a capital city! 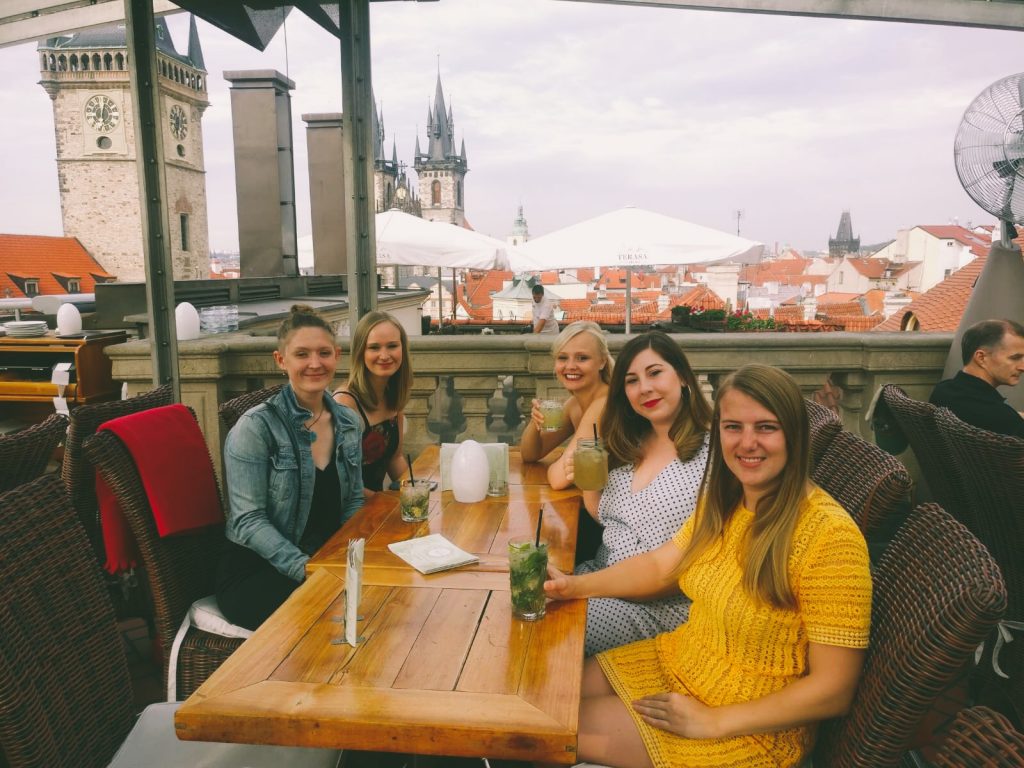 I think we spent more time admiring the traditional trdelník (ice cream chimney), than we did the historic monuments. The smell of rolled pastry, sugar and cinnamon fills your nostrils as you wander around the Old Town, and if you’re not salivating you’re not human. They originate from the region of Transylvania, and well worth sinking your teeth into. 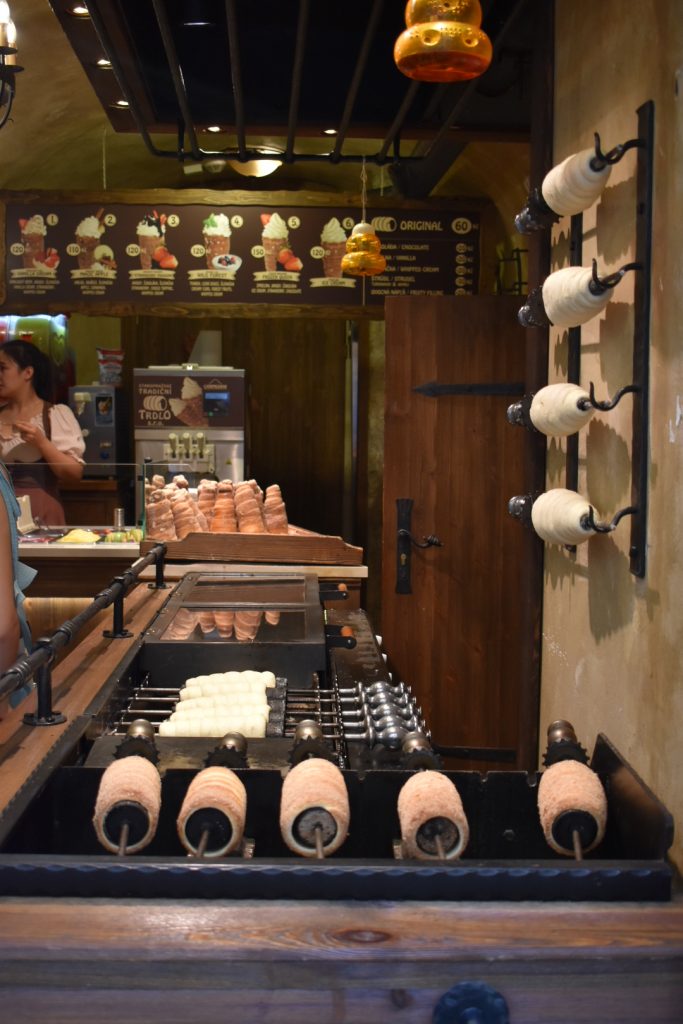 This delectable treat is made by wrapping the pastry dough around a wooden or metal stick, roasting it over an open flame and coated with sugar or cinnamon. See why I recommended the bike ride now?! 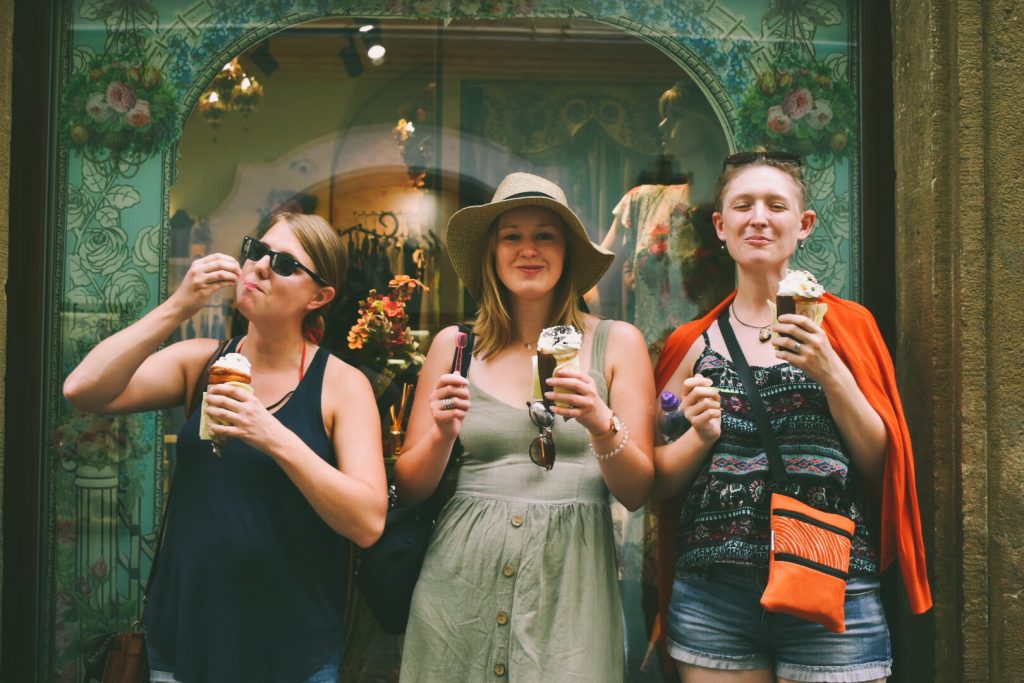 Tara, Kat, and Hannah chowing down

Luckily for us our apartment was only a minute away from an urban market that has been around for centuries, filled to the brim with stalls selling local fruits & vegetables, plus art, crafts and souvenirs. If you want knick-knacks then Havelské tržiště is your place. There is also a tasty and equally trendy cafe called Venue, which overlooks the market and has nailed the art of brunch. 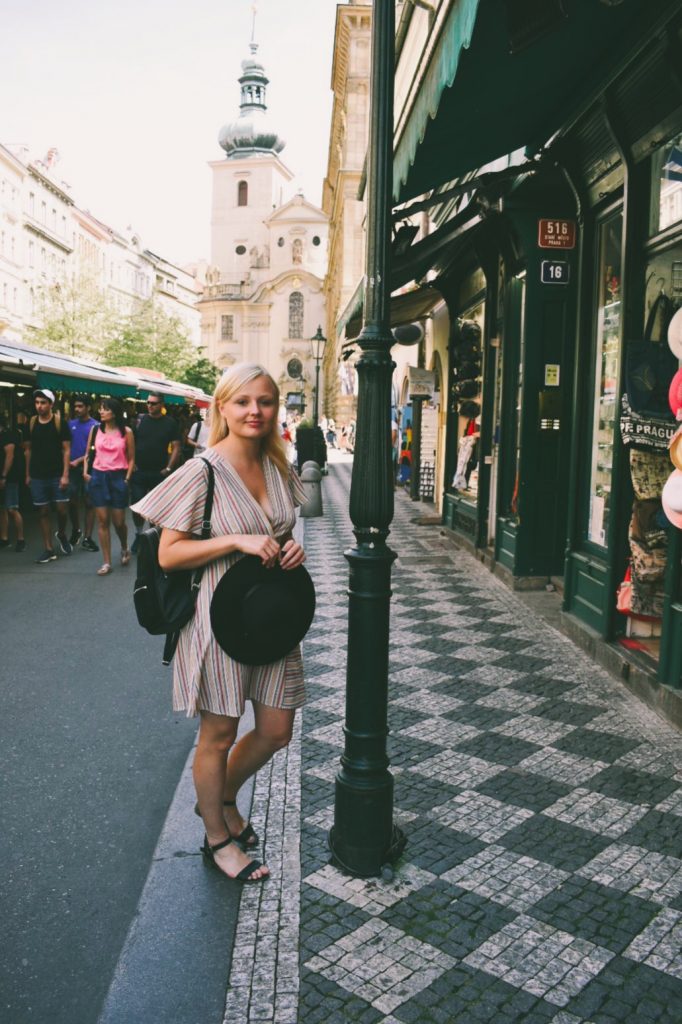 Here is a good article with details of other popular markets in Prague if you like to splash the cash.

Hire a pedalo and go slow

This one only really works in the summer months – you can try in winter but I imagine you wouldn’t get very far. A popular pass-time for both locals and tourists is enjoying the many piers along the riverside and activities they have to offer. One of those is to hire a pedalo in the shape of a car or bird. 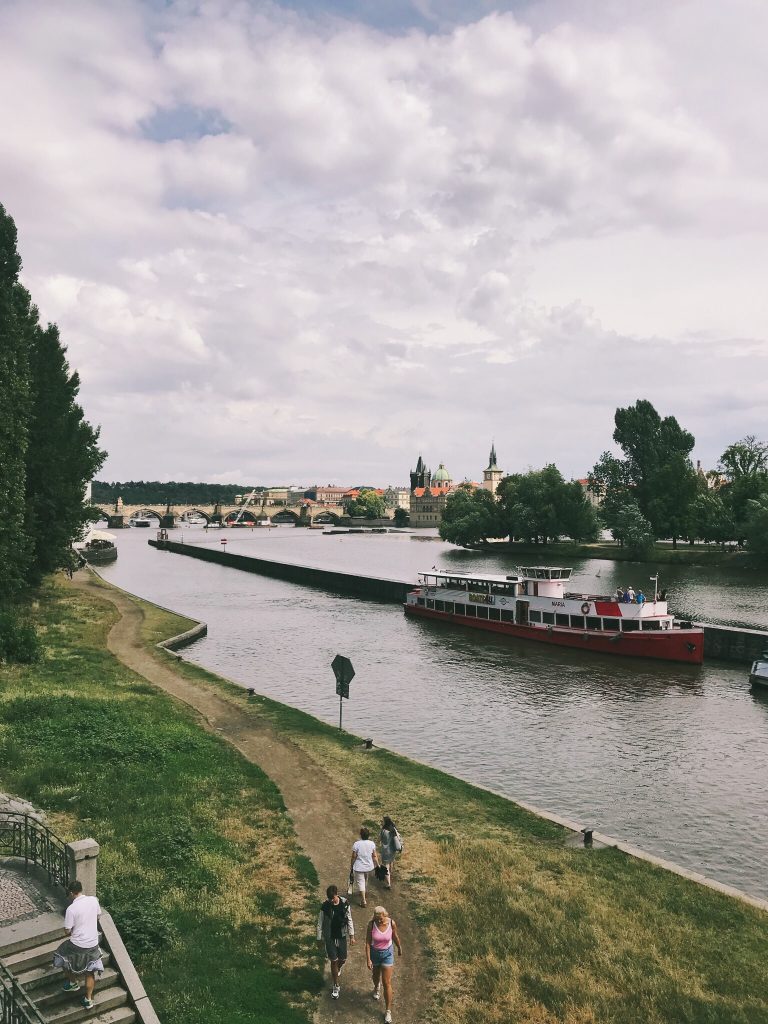 Slovanka Boat Rental is the best rated for price and you can take out your own food and drink. You will need proof of ID though so don’t forget otherwise you’ll be waving your mates off from the banks with a face like a slapped arse.

Assimilate with the stags on a night out

You didn’t think you could avoid a night on the town ey? It’s Prague! Even if you’re not a heavy drinker, the atmosphere in the city when the suns goes down is electric. We began our evening at La Bodeguita del Medio, a Cuban bar and restaurant with live music, tasty tequila, and yummy reasonably priced food. The staff were friendly and accommodating and there’s a vintage red Cadillac parked out front! 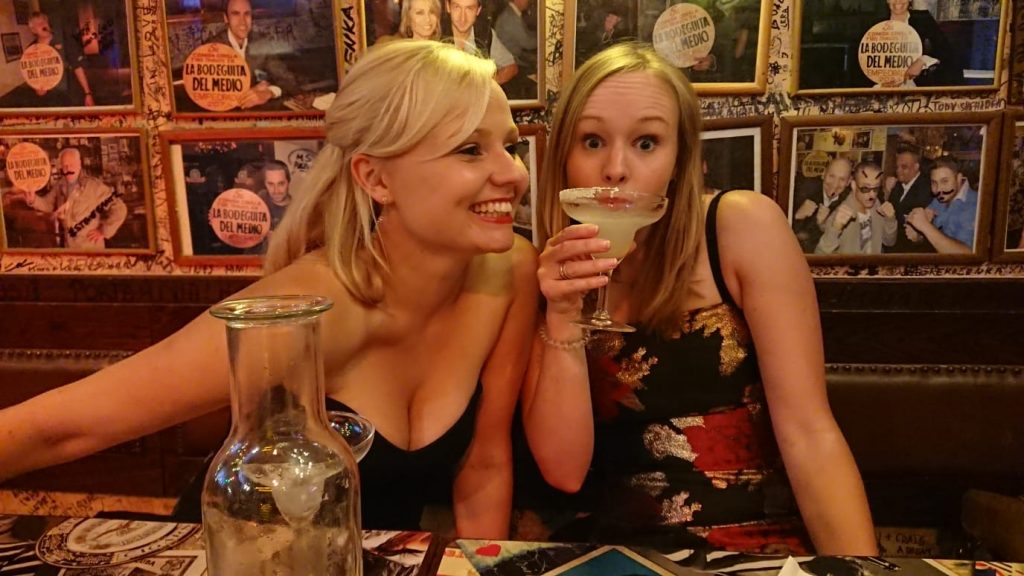 From there were headed to Cafe 80s, which unashamedly plays the hits of the era in a funky and slightly cheesy set up. After we stumbled over to Coyotes, where just like the movie there were dancing women shaking what their mamas gave them on the bar. 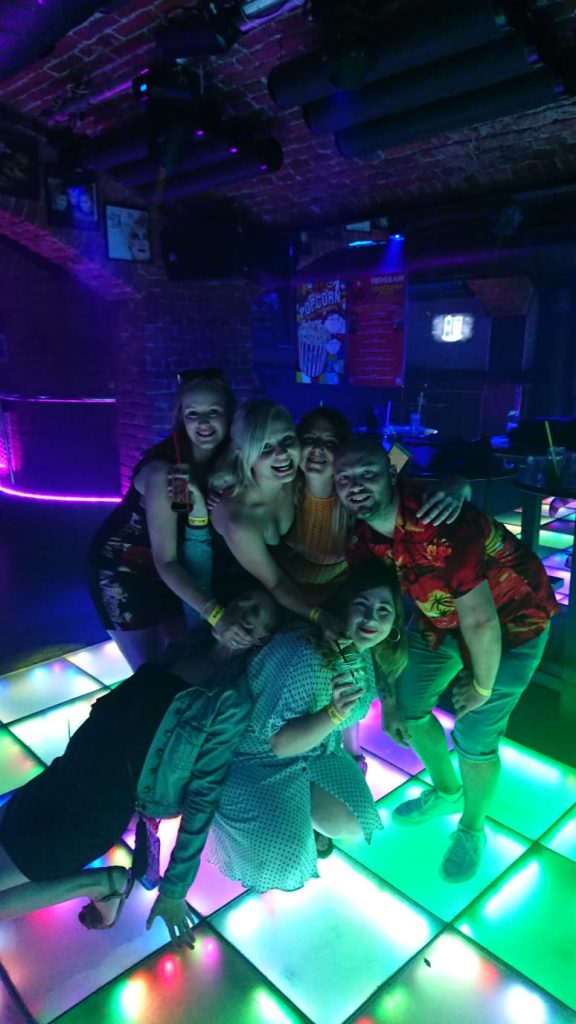 Finally, from what I’ve been told but can’t remember, we finished off the night at Duplex Club where they were more dancing women but this time in cages (don’t worry they’re allowed out from time to time).

Wherever you decide to go, they’ll likely be an endless supply of cheap booze and strobe lighting. 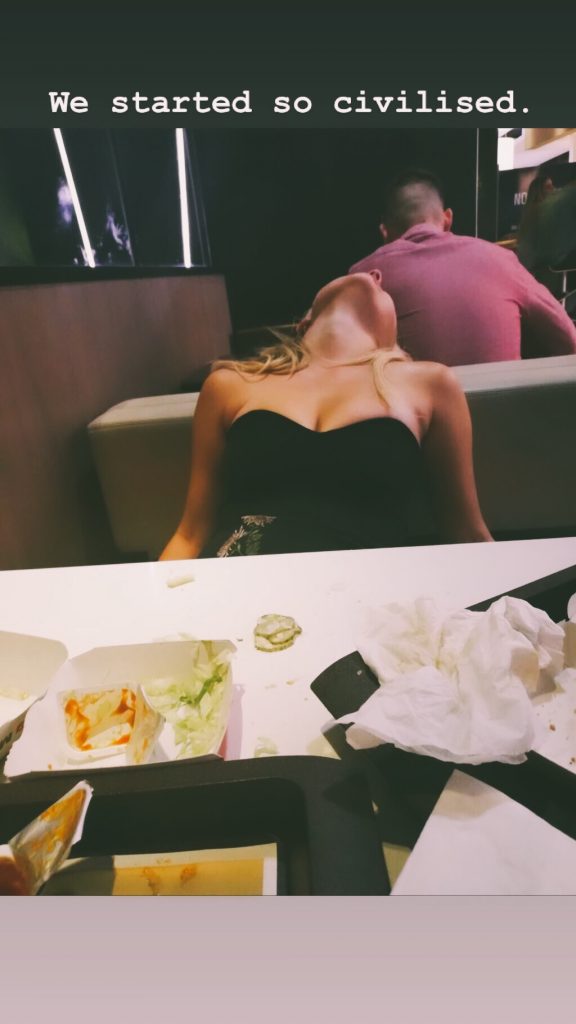 Seek out the John Lennon wall

After his murder in 1980, John Lennon became a hero for many young Czechs. An image of Lennon was painted on a wall in a secluded square opposite the French embassy along with political graffiti and occasionally Beatles lyrics. 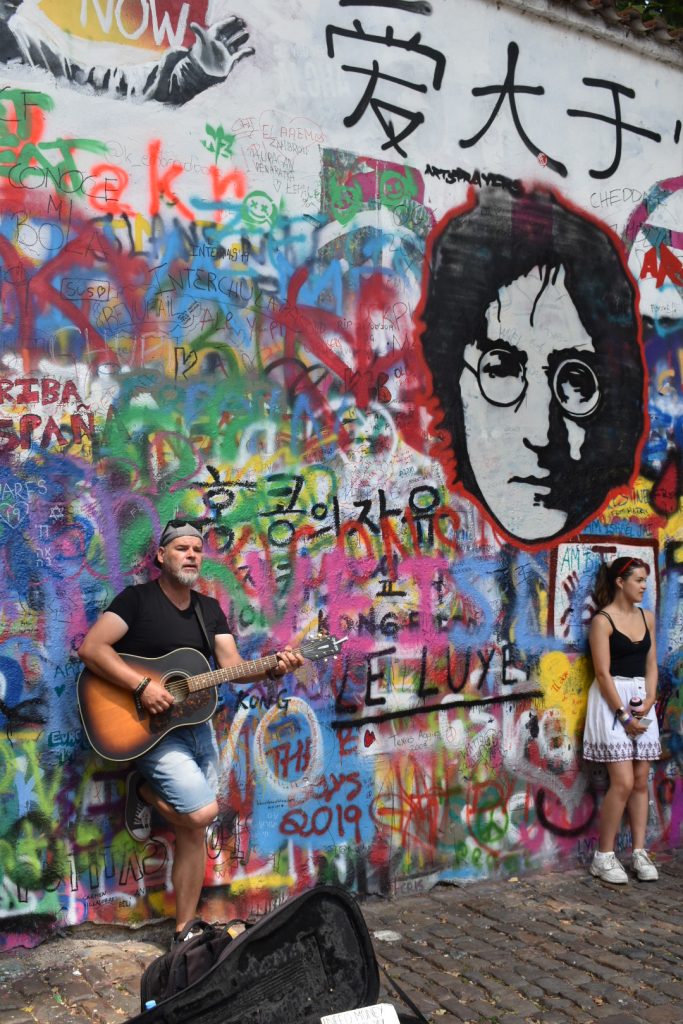 Despite countless attempts to get rid of the Lennon Wall during the communist regime (they weren’t a fan of pop music), the police never managed the task. It’s become a hot spot for instagramers so try to go early or get ready for some elbow pushing… 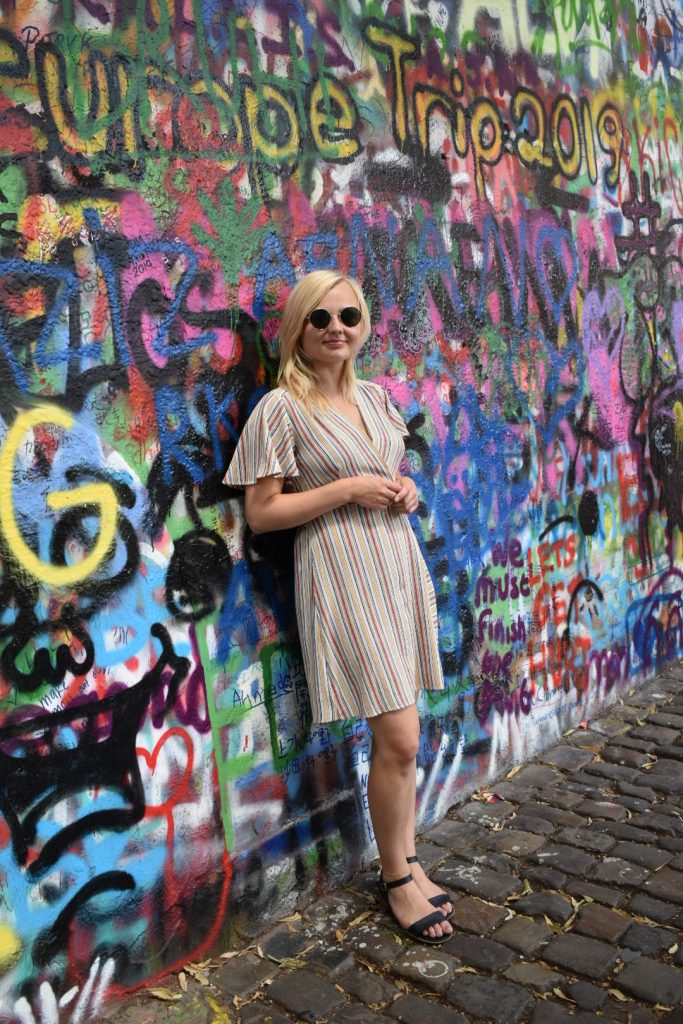 Let’s just say the C in Czech doesn’t stand for customer service. If you’re English, like us, you might find the Czech approach to conversations apologetically direct.

The people we came into contact with at bars and restaurants seemed to lack patience with simple questions like ‘ can I have a napkin please’, ‘do you have sugar’, ‘why is the cheese on toast actually just a cheese sandwich’, and ‘what does possibility of bread mean on the menu?’ Apparently it means exactly what it says, you’ll either get it or you won’t depending on the mood of the waiter! 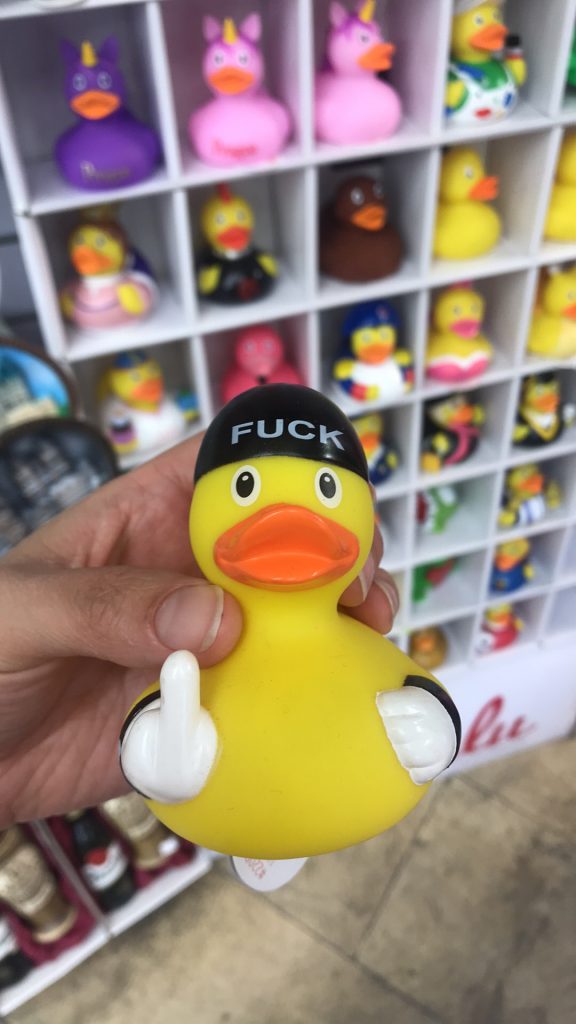 I’m not suggesting all Czech people take this approach, and this is only our experience. But just bear in mind if you want 5 star service you’ll probably have to pay a lot more or fork out for a flight.

We stayed at Empirent Old Town 2 Apartments, which were located right in the heart of Old Town, but felt like we were worlds away from the hustle and bustle of the streets below. 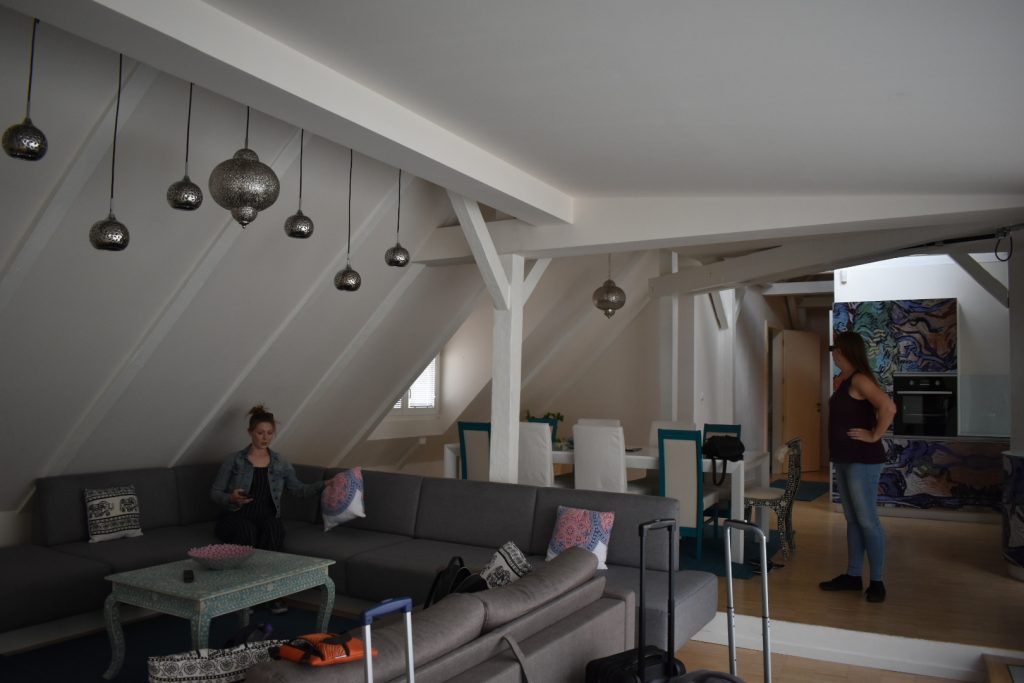 It worked out at around £50 a night per person for five of us, and they have a range of different sizes depending on what you’re after.

They’re strict with noise however, as it is in an apartment block and there are neighbours, including a very fat cat!